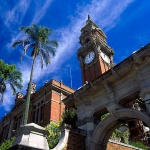 Sydney, is rightfully considered one of the most beautiful cities in the world - is the most cosmopolitan, most cheerful and most beautiful city in the country. The city was founded in 1788 on the bay of Port Jackson (the first European settlement in Australia) and only 200-odd years has evolved from a small settlement of convicts in a huge (4 times as much of Moscow with a population of just 4 million people) mod city, carefully keeping the monuments of its history.

As unique contrast of skyscrapers and the City of Rocks area of old buildings, and King's Cross, souvenir shops in the Yorks and Elizabeth, and Asian neighborhoods of Chinatown and Liverpool Street, the vast green spaces of parks and boulevards, buildings and ultramodern Olympic venues Kronos Hill, Sydney and Syuperdom Olympique Stedium in the Homebush area, the majestic (and one of the largest in the world) Bay Sydney Harbor and thrown over her a unique single-span bridge Harbor Bridge, a length of 503 meters. During lunch at the Sydney Tower in Market Street, at an altitude of 305 meters, you can not only see the layout of the city, but also taste many Australian and Asian dishes, exotic seafood, meat, kangaroos and emus. On Oxford Street is focused a lot of bars and restaurants in the area of Darling Harbor - hundreds of galleries, bars, hotels and restaurants, and on George Street and Market Street - the best selling points of the city.

Here you can also right in the city sunbathing on stunning beaches Bondi (the most famous beach in the country, its golden sand stretches for kilometers in length), and Manley, visit one of the largest in the world, the Sydney Aquarium in Darling Harbor or zoo Toronga, in which the 1916 for the first time in the world to contain the animals in the wild - in an open-air cages, as well as the famous Opera House - the symbol of Sydney or carved into the rock by the first governor of the city viewing platform "Armchair Mrs. McGuire." You can spend a whole day in a huge shopping complex, House of Queen Victoria, or in a luxurious Royal Botanic Gardens, where assembled an extensive collection of plants from around the world.

In the city of many interesting cultural sites - the famous Sydney Museum of History and Anthropology, Australian Military Memorial Art Gallery, National Maritime Museum (really interesting part - contains all about the sea and water craft - from boats to battleships and Aboriginal surfboard), Fiction Gallery of New South Wales, Museum of Applied Arts and Sciences, one of the most "courageous" museums - the Museum of Modern Art, Museum of Antiquity Nicholson, Australia, Wild Animal Park and Hyde Park.

Be sure to visit the embankment in the vicinity of the factory Vulumulu and opals, which can not only learn about these amazing stones, but also to see the entire process of transforming ordinary-looking rock in the jewels (Australia produces 90% of the world's opals). There you can buy a variety of jewelry black opals, pearls and colored diamonds.

In the vicinity of Perth's interesting to see the world's largest discovery of gold and nickel in the vicinity of Kalgoorlie, as well as mines of the world's largest diamond district of Kimberley. This is a region of large rivers and beautiful landscapes, whimsical nature and relict plant and animal species. They say that the most typical Australian landscapes - the red earth, rocks, trees and blue skies are found here.

Darwin - a small but modern city, the center of the northern provinces and the main "gateway" country in Southeast Asia, is located closer to Jakarta than to Sydney. In this city a short time you can get as much experience and acquaintance with the beauties of wild nature, which are unlikely to be found somewhere else. In Kakadu Park (included in the UNESCO World Heritage list) in the unique natural landscapes assembled an excellent collection of wildlife, flora and representatives of the bird of peace of the continent, the Park of Wild Animals of the Northern Territories ( "Territory Wildlife Park"), along with other representatives of the Australian fauna, You can get acquainted with the legendary Australian fish-giant barramandi. In the vicinity of Darwin are beautiful parks and Lichfield Gorge Catherine.

But the main attraction of Australia yet - it stretches along the entire east coast of Great Barrier Reef, part of the UN World Heritage list, with its world-famous coral reefs and islands, resorts Layzard, Bedarra, Hyman, Hamilton, etc. This is the largest reef system in the world and the largest structure, "created" by living organisms of the planet. In the north reef virtually continuous and is located only 50 km. from the coast in the south it is divided into a group of individual reefs, in some places, retreating from the coast to 300 km. Hundreds and hundreds of islands protrude from the ocean depths to the surface, and only two dozen of them inhabited. Great Barrier Reef - Underwater Mecca "of all divers in the world.

Island Magnetic Island is probably the best place on earth for diving and yachting. Here marvelous beaches of coral sand, fine hotels and virtually untouched wilderness - there is even a colony of koalas.

Island Layzard Island (Lizard) - one of the most exclusive resorts in the world. This is the most northern, the most famous, but also a very expensive resort Barrier Reef. But guaranteed exceptional comfort, superb cuisine, beautiful beaches, fishing, excellent diving (rays, Manta Rays, moray eels, etc.), tennis, cruises, trips to the reefs, water skiing, swimming pool, restaurants and bars.

Reserve Wallgrove street - about 40 miles east of Sydney is reserve with wild animals. A large collection of animals living in natural conditions. Allowed feeding kangaroos and photographed with koalas.

Glidsvud (Gledswood), located 65 km west of Sydney, Australia will allow you to feel the past. Breathe in the atmosphere of colonial life. You will see the shearing, demonstrations of dogs to protect sheep, learn how to throw a boomerang and take a trip on horseback.

Park Dream World - the wonderful attractions, recreating the spirit of old Australia. You will be able to communicate with kangaroos, ostriches emus, hold the hands of charming koala bears. He sat down on the train, you obedete the whole park, you can go on a cruise on an old boat or go on a journey through the air way. At Tigrinya island you will meet these Bengal tigers.

Port Darling (Darling Harbour) - a modern center located near the port. The center includes Sydney aquarium with a huge variety of fish and ocean dwellers, Imax Theater, the National Maritime Museum, Chinese Garden, many restaurants and shops. National Maritime Museum - a submarine and various vessels which are directly in the water. You will be able to explore their own and in fact try his hand at managing a real sailboat, of course, with the help of the instructor.

Taronga Zoo (Taronga Zoo) Zoo is located opposite the port and contains a rich collection of various animals, both domestic and exotic. Specially allocated space for Koala, which you can take pictures.

Imax Theater - a sort of interactive show. Huge, probably the world's largest screen, allows you to not only see, say, the eruption of the volcano, but feel it, through various audio-visual effects.

Rocks - quarter of the first European settlement in Australia. Recovered and restored homes of that time, streets, specialist shops and, of course, is the oldest pub in Australia, "Lord Nelson".

Royal Botanic Gardens, which lie in an area of 30 hectares and filled with amazing beauty, plants and flowers.

Blue Mountains - this place is located just 104 km west of Sydney. Striking rocks called the Three Sisters - giant stone formations of the legends of the Aborigines. With many viewing platforms you will see the Australian Grand Canyon. The steepest railway, from the top of the cliff, you can descend into the eucalyptus forest and a walk to Katoomba Falls.

Kings Canyon is located just 323 km west of Alice Springs. Canyon length of 2 km, and the height of the walls, painted in pastel colors reaches 200 meters. Here is "lost city" and "Garden of Eden" with its lush vegetation.

Ayers Rock (Ayers Rock) - 450 km to the south-east is a unique beautiful place - Ayers Rock. Everywhere in this area include many sacred Aboriginal rock rock formations. One of the most famous is Uluru - a huge boulder, the largest monolith in the world. Especially fine is the place at the time of sunset and sunrise. Not far you can find accommodation in a luxury hotel, made like a resort.

Fitzroy Island (Fitzroy Island) - a set of types of accommodation, including campsites. An ideal place for family holidays. A wide variety of sports entertainment.

Dunk Island (Dunk Island) is famous for its rain forests and dwell in them colorful birds and butterflies. Accommodation ranges from luxury huts, located right on the shore to the houses with gardens. Water sports, horseback riding, golf.

Bedarra Island (Bedarra Island) - an exclusive and luxurious island. Not more than 16 pairs may be simultaneously in the same hotel. It is forbidden for children younger than 15 years. Accommodation in the villas. Tennis, water sports, refined cuisine.

Island Orpheus (Orpheus Island) - is home to dolphins, giant tortoises, from August to October swim killer. Any water sports. Not allowed to rest with the children. Accommodation in bungalows and studios, located right on the beach.

Hyman Island (Hayman Island) - one of the world's most famous and luxurious resorts. Excellent food, water sports and elegant atmosphere.

Hamilton Island (Hamilton Island) - the different types of accommodation. For any budget. Water sports, national park, 10 restaurants and much more.

Island Brampton (Brampton Island) - a romantic island, filled with the life of the jungle and forests. Kangaroos and other animals. Bungalows were located directly in the lush garden. A variety of sports.

Island Heron (Heron Island) - a great resort destination. It is considered one of the most beautiful and attractive places on earth for scuba diving. The island is surrounded by white sandy beaches, clear waters and acres of brilliant coral.