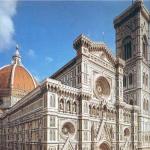 It was in Florence is the Renaissance in all its splendid architectural splendor: Cathedral of Santa Maria del Fiore and the church of Santa Croce, the Bargello and the Palazzo loggia Lanzi, Piazza Signoria and Ponte Vecchio. Florence is like a casket for jewels: its palaces, galleries and museums filled with masterpieces of art. What stands alone Uffizi Gallery, founded by a noble Florentine family of Medici!

Florence was able to perfectly preserve its historic character and is considered one of the most beautiful cities in the world. But its charm is able to feel the only one who does not confine itself to visiting museums, art galleries and churches, and look into the cafes, shops and artisans to market on the other side of the Arno. Then he will understand that in Florence there is another life, not limited museum frame. Here are flourishing such crafts as majolica, leather work, weaving of straw, reed, willow.
At present, Naples, along with Milan and Rome - is one of the main centers of the world fashion: here are "headquarters" of such prominent companies as Gucci and Ferragamo. The most elegant fashion stores, located between Ponte Vecchio and Palazzo Pitti, in the Via Guicciardini, Via de'Tuornabuoni and Via Strozzi, will win you the richness and variety of goods. Lovers of antiques will find furniture and luxurious accessories in Borgo Onissanti and in neighborhoods around the Via della Vigna Nuova. Florence is also famous for its jewelers: the most expensive and exquisite jewelry stores located in the famous "Golden Bridge" - Ponte Vecchio. Plush leather products and footwear to be found in stores located between Ponte Vecchio and Via Por'Santa Maria in Via de'Kaltsayoli and at the end of Via Roma.

Beautiful evening Florence: street musicians, the bodies of cathedrals, violin, small chapels and luxurious restaurants with Florentine cuisine. And if you were in Florence during the carnival - believe that you are very lucky!

San Miniato al Monte - a high hill on the left bank of the river Arno. Surrounded by powerful bastions, towers of San Miniato al Monte. It is the oldest cathedral of the city, which was built in XI-XIII centuries. It is decorated with marble, folding in geometric symbols. Inside the cathedral's master of Luca della Robbia, Agnolo Gaddi, and Tadeo. The cemetery is located behind the cathedral and the oldest in Florence and is called "Saints of the gate."

The huge dome of Santa Maria del Fiore, which first strikes the eye when you look at the panorama of the city, is now directly above us. This majestic dome was designed by architect Filippo Brunelleschi in 1418 and completed in 1438-m. Then throughout Europe, there were only two such facilities: Hagia Sophia in Constantinople and the Roman Pantheon. The height of the dome of Santa Maria del Fiore 107 meters. Inside the church is divided into three naves. There are countless masterpieces of the Italian masters, and shot up into the sky beside a slender white-pink bell-tower (its designed by Giotto).

Florence - a symbol of the Renaissance. Its streets, squares, palaces and temples are decorated with the works of the great Italian masters.

Basil Santa Croce, the tomb of the great people of Italy, is one of the most famous churches.

Piazza della Signoria - the historical center, where you can admire the collection of sculptures, including masterpieces of Michelangelo's David, Cellini's "Perseus", etc.

Sacral downtown area of Saint John was founded with the baptistery (special attention should be given the door of the Baptistery, called "Heaven"), the Primate's Palace and loggias Bigallo built XIV century, and the Cathedral, where, next to the Cathedral and Giotto's bell tower are the Brotherhood of Mercy and the Museum of the Cathedral.

This - the natural center of the city, where converge the numerous streets and alleys, from which the visitor is a different perspective unmatched sight: the splendor of the Cathedral, the elegance of the Belfry, classical nature and the harmony of the Baptistery - all zahvatyaet in the sweet captivity of the tourist, the first time is going through such experiences . This complex, heritage and symbol of wealth and ambitions of medieval Florence, the city merchants - fans of culture and art, is the hallmark of the city and velichyshey proud of all generations of Florentines.

Baptistery, the baptistery is dedicated to John the Baptist (San Giovanni Battista), the patron of the city, is the most ancient buildings in Florence. Now almost all researchers agree that the Florentine Baptistery is a Romanesque structure of the V century. Outside the marble cladding, however, belongs to the Romanesque style, XI-XII centuries, and in the beginning of XIII century ancient semi-circular apse was replaced by a modern rectangular.

In the words of Dante, one of the most prominent citizens of Florence, were baptized here, "beautiful San Giovanni" was constructed from various materials of other buildings. Interestingly appointment galleries, bordering the walls of the Baptistery at half height (gallery called matroneo - from Roman matron - a woman). This was the only place where there might be a woman.

Paul baptistery very rich and partly encrusted with various marble. Vault of the dome is decorated with wonderful Byzantine mosaics XIII-XIV centuries. Scenes of mosaics - the Bible: a triumphal arch located above the picture of the Last Judgment with a gigantic figure of Christ, who shared the souls of the righteous and the wicked. Others mosaic forming horizontal rows represent (from the porch) the history of John the Baptist, Christ, St. Joseph and the Book of Genesis.

"Gates of Paradise"
Of the three doors of the Baptistery, the most ancient is the southern (usually open to the entrance), a work of Andrea Pisano first half of the XIV century. The door consists of 28 panels with reliefs depicting scenes from the life of John the Baptist and the principal virtues. The other two doors are made by Lorenzo Ghiberti. North door, the first version of which was created 23 years from 1401 to 1424, and consists of 28 reliefs, prisoners in the framework and implemented in the Gothic style. These reliefs represent the history of the New Testament, as well as images of the four Evangelists and Doctors of the Church. And finally - the eastern door. masterpiece of Lorenzo Ghiberti. For 27 years, from 1425 to 1452 the artist created a work that has no analogues. Separation is not at 28, and 10 parts, without the framework as a decoration, the door is the picture of the biblical stories. The manner of Ghiberti, always aspired to be moderate, in contrast to his rival, Brunelleschi, who preached the revolutionary views in the arts, the most consonant with the spirit of the Renaissance. Deep prospect. commitment to classicism, and the gold surface of the most perfect work tool gave rise Michelangelo called the door 50 years after its establishment, "Gates of Paradise." At the beginning of XIX century Russian masters cast a copy of "Heaven" and established at the northern entrance of the Kazan Cathedral in St Petersburg ( at the same time, however, part of the panel changed their places.

Cathedral
Around 1296 it was decided that the ancient church of St. Reparata no longer correspond to the importance and size of the city. The new council decided to devote the Mother of God, and called - "The Cathedral of St. Mary with a flower" (Santa Maria del Fiore), implying connection with the name of Florence - "blooming". Construction of the Cathedral commissioned by Arnolfo di Cambio, who years earlier had already started work on the church of Santa Croce. Work on the construction of the Cathedral was delayed for many years and only in 1436, after 470 years of construction, Pope Eugene IV consecrated the cathedral. Later in the XV century, the lantern of the dome was topped by a cross and the ball, and only in the middle of last century was done by lining the facade with marble figure of the architect Emilio de Fabris.Sobor made in the form of a Latin cross with three naves, separated by huge pilasters and choirs, from which branch off the two side polkruglaya transept and apse.

Tight interior and exceptional ease further underscore the scope room. The Cathedral is 150 meters in length and is the world's third largest Christian church after St. Peter's in Rome and St. Paul's in London. As for the construction of a Gothic cathedral, Santa Maria del Fiore restraint and proportionality of parts reflects the spirit of classicism, una-sledovannoto Florence from Rome. The contrasts and vertical disparities are muted Gothic perfection of composition, which is based on a perfect square with sides 38 meters. This size is the height and width of the central nave of the cathedral. Place famous sermons of the Dominican monk Savonarola, the Cathedral was also witness to the tragedy (known as the "Pazzi conspiracy"), which was played at Easter 1478. By order of Pope Sixtus IV and the Florentine Pazzi family of several assassins tried to assassinate Lorenzo the Magnificent and his brother Giuliano de 'Medici. As a result of this attack Giuliano was killed and Lorenzo with the help of friends managed to escape in one of the vestries Council.

However, Florence - it is not only a city of museums, but also the center of education, science and culture. There are numerous research institutes, as well as a venue for music festivals. Those interested can visit stareyschy European botanic garden, his collection began to gather in the XVI century. or stroll in the gardens of Kashin and Boboli. 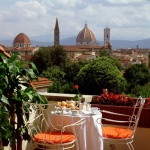 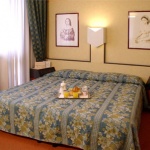