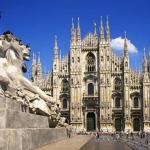 The ancient name of the city - Insubriya Mediolanum (Insubria Mediolanum), dates back to 197 BC, when living there Celts were conquered by the Romans. Status of Milan, as one of the major cities of the Roman Republic and later Empire, rapidly strengthened. In 292, with the Emperor Maxentius, Milan even has for some time, its capital. Loss of freedom after the invasion of the French King Charles VII, Milan for a long time could not find it, passing it to the Spaniards, then under Austrian domination. And only in 1859 thanks to Victor Emmanuel II the city became part of the Italian kingdom.

Milan - a city where you can experience all the worldly pleasures. Walking shopping becomes here almost religious in nature. Thriving film and theatrical life, as well as clubs of various directions and enticing restaurants. Indeed, a city more famous for its character and not the presence of attractions and lifestyle.

In the architecture of the city dominated by a combination of narrow, winding streets and small squares, medieval churches and modern buildings.

The symbol of the city - the Duomo, the construction of which lasted from the XIV to the middle of the XIX century. The world famous and the fourth largest church in the world located in the heart of the city and is its symbol. Construction of the cathedral began in 1386 and lasted almost five centuries. This late gothic marvel contains a forest of steeples and sculptures, marble pointed turrets and columns, woven together a web of soaring towers. Above the altar of the cathedral is a nail that is said to have been brought to the crucifixion of Christ. The main attraction inside the cathedral and in the heart of every inhabitant of the city - a golden statue of the patron saint of Milan ( "La Madonnina"). View from the roof of the building - the most impressive in town.

Piazza della Scala opera house is located at La Scala. Built in the XVIII century., He now is crucial not only for Italy but for the world's musical culture. Built by the famous architect Giuseppe P'ermarini in 1177-1778 gg. in place of the church of Santa Maria della Scala, La Scala is one of the most famous opera houses in the world. Theater is known far beyond Milan their peerless acoustics and famous composers whose works were raised here. Also, the glory of the theater associated with the activities of the brilliant conductor Arturo Toscanini.

"The Last Supper" by Leonardo da Vinci and other great works of art are located in Milan, as well as a delightful masterpiece of Gothic architecture - the main cathedral of Milan (Duomo). Moreover, Milan excels in an area that really matters to many Italians, from year to year oderzhivaya football victory over the other teams of the country.

Ambrosiana Pinacoteca Museum, founded in the 17th century by Cardinal Federico Borromeo, is considered one of the best galleries in Milan. The collection focuses on works from the 15th to the 17th century. Here you can contemplate such masterpieces of painting as a "Fruit Basket" by Caravaggio, Raphael's cartoons for the Vatican fresco The School of Athens, as well as paintings by Titian, Botticelli, Leonardo and other artists. Adjoining the library (Biblioteca Ambrosiana, 1609) also occasionally arranges exposure and is considered the oldest public library in Italy.

Sforzesco Castle Construction Castle, was originally a military fort, started in 1368 Later, the fortress was expanded and converted into a residence of the powerful Visconti family. In 1450 the castle was completely renovated for an even more prone to comfort the family of Sforza. It was then that the castle had reached the grandeur which now delights guests Milan. Now the castle is a picture gallery, a collection which includes paintings and sculpture by such masters as Michelangelo.

Church of Santa Maria delle Grazie
Church of Santa Maria delle Grazie - Church of the Renaissance in Milan, commissioned by the Dominican monks architect Dzhuinforte Solari v1466 -1490 gg. Subsequent modifications were made by the architect Donato Bramante v1492-1497 years. Church is famous fresco by Leonardo da Vinci's "Last Supper" by the great artist painted in 1495 - 1497 for the refectory is located here while the Dominican monastery. Classic English literature of the twentieth century, Aldous Huksley called the mural "the saddest piece in the world of fine art. At 18-19 in the fresco underwent a number of well-intentioned, but poorly executed "corrections". However, the recent prolonged restoration of destroyed all attempts to previous centuries of adjustments to correct the damage they caused. In addition, the fresco was damaged not only by Napoleon's troops, who used a wall of the church for the training of fire, but the Allied bombs that ripped apart the roof of the building during the Second World War, then torn to pieces made during the 3 years it was abandoned to its fate. Thus, the "Last Supper" is nothing more than a shadow of a masterpiece, created by a great painter. Nevertheless, fresco, embodying Jesus Christ addresses his disciples: "Truly I say to you - one of you shall betray me", still a powerful influence on emotions. Visitors are permitted to enter the church and examine the mural in groups of not more than 25 people, but first they must pass through a certain device, removes dirt from clothes. Queues wishing to see the fresco has never dried up, and tickets are usually sold in advance.

Often overlooked by other great treasures of the Church's own 15 th century, the largest of which are elegant dome of the temple and other architectural innovations of one of the most famous architects of the High Renaissance, Bramante.

Sightseeing in Milan, you inspect endlessly, coming here again and again. But all the same, in fact, not only does the leader of Milan in the number of tourists in comparison with other cities in Italy. For most guests Milan - first of all the world capital of fashion. It sdes represented literally any brands and names, popular in the fashion world. Author's clothing, shoes, accessories, furniture, fabrics, luxury ... an amazing and totally unique place - the Milan box "or" Il quadrilatero della moda "(Fashion Square) - this is just fashion, style and luxury from the greatest designers, ultra-creative solutions young fashion and nothing but fashion. The area bounded Via Montenapoleone, Spiga, Manzoni, Corso Venezia, Sant 'Andrea, Borgospesso, Santo Spirito, Gesù is a paradise for lovers of "high" of shopping. In a set of arches "Rorta Nuova» (built in the twelfth century to protect against Barbarossa) on the street Manzoni, close to home Armani, inserted perfectly preserved plate (pre-Christian era) found during the excavations. One of them shows the family portraits merchants tissue, evidence that trade in fashion goods are here for two thousand years!

Milan is famous firms trendsetters, shops along the Via Montenapoleone and the Galleria Vittorio Emanuele in the area of the Duomo, which has the reputation of the oldest shopping center. Along with New York, Paris, Rome and London, Milan is the world capital of fashion. Also, this metropolis is known for producing cars Alfa Romeo, Milan and silk. 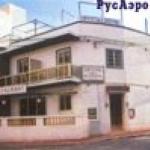