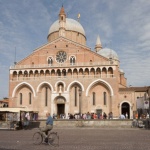 Padua - a small town in Northern Italy and the administrative center of the province of Padua. The historical center is just around 1,5-2 hours, but the beauty of the architecture of Padua will remain in your memory forever. For many centuries, pilgrims go to Padua, students and the true connoisseurs of art. And the relics of St. Anthony, preacher of the XIII century, in June, crowds of believers come to worship.

Padua - a major cultural center. University of Padua, was widely used in Europe, it taught AP Pomponazzi, A. Vesalius, Galileo. After the 1797 Padua alternately ruled Austria and France. In 1813, establish the rule of the Austrian Habsburgs, as established by the Vienna Congress of 1814-15-th years. In 1866, Padua became part of the Kingdom of Italy.