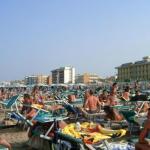 Riccione - a lively Italian town, in whose territory the number of buildings, such as the ancient Romans, but only in 1865, with the construction of the railway, Riccione is a famous resort with a beautiful shestikilometrovym well-groomed beach.

Since then, the history of tourism of the city knows only the success and rapid growth, giving priority to quality. At the moment, Riccione is a beautiful corner of the secular holidays, where good food is combined with numerous entertainment and recreational activities, which abounds, creative and live the life of international class. In Riccione, there are 500 hotels and 4 camping sites. The city has always been, is and will be a place for an elite audience, thanks to a fashionable villas, luxurious hotels, a lot of greenery - is open five beautiful parks. It is no accident that the resort is called the "Green Pearl of the Adriatic".

During his rule, Mussolini chose Riccione permanent place of summer rest. About 20 years his family spent their free time they bought a villa, which is currently being renovated. In Rome is Villa Torlonia, where Mussolini's family lived. This twenty-year period to provide further impetus to the prestige of the resort. There was hardly a newspaper or a film magazine that would not inform the public about the events in the city. Thus, Riccione is a collective dream, something something "island paradise".

This glory is assigned to the city. Central street Viale Ceccarini closed for the passage of vehicles. Instead of asphalt, paved with cobble-stone quartz, pink and white marble slabs. Here you will find the finest shops, bars, cafes, as well as an elite and extravagant public, where celebrities get lost in the crowd.

Viale Ceccarini considered the most fashionable and elegant interior of the Adriatic coast, the center of summer gossip columnist, a meeting place for visitors from various countries. At the end of the day, with the onset of the cool, the streets of the city, where there is a merry festive atmosphere filled with vacationers. You can hear the musicians playing on the square and look at the artists, depicting their pictures in front of passers-by.

True connoisseurs of night life in Italy noted that discos and night spots Riccione more stylish, and in the tourist season more crowded.

In addition, in Riccione is one of the largest water parks in Europe and the Dolphinarium. Dolphinarium was opened in 1963. In addition to performances, a museum of sea shells and are aquariums with flora and fauna of the Mediterranean, models cetaceans. Open from April to September.