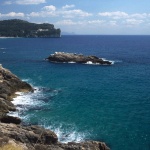 Sabaudia - is a modern resort town, which was built in 1934 at the request of Mussolini in just 253 days. This is a place of rest of the Italian elite has managed to maintain some separateness and uniqueness. It is located only a few hotels, as well as numerous summer homes of the Italian countryside bohemians: actors, directors and stars of television.

Sabaudia affects the abundance of flowers, greenery and unique natural beauty, which compensate a little bit hard architecture. Hotels are few, and therefore Sabaudia has to tranquility.

On beautiful land - Sabaudia - knew even the Roman emperors: a special microclimate of this "oasis" has arisen because Paola Lake, which stretches along the beach at 7 Km. Between salt and fresh waters formed a long line of sand dunes, which locals call the "white sea".