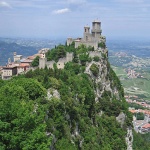 San Marino - one of the most visited by tourists of European countries - on average, here comes to 3 million tourists a year.

Home "pearl" of the country, despite its tiny size - perfectly preserved medieval castles and abundance. Almost all the country's population lives in small towns, castles (Akvaviva, Serravale, Borgo Maggiore, Faetano, Domagnano, Fiorentino, Montegiardino and Chezanuovo), which survived almost intact. And the other towns of the country is so picturesque that constantly serve as a special decoration for historical films.

The appearance of the capital is formed by small old houses, terraces rising from the slope of Mount Titano. The narrow streets of the "Upper City", weaving between once stood here fortifications, loops runs up top, forming a set of tiny squares, alleyways and dead ends, so characteristic of medieval towns. Here and there are the ruins of ancient fortifications that once defended the city and its independence from the invasion of its neighbors.

Three powerful belt of fortifications, erected at different times, once encircled the entire mountain, offering a virtually impregnable fortress. HN is not the same from them are preserved only dungeon and extended fragments of walls.

First Time with a powerful Fort Guaita or La Rocca (X-XI centuries, now, here are a small Artillery Museum and the Museum Guard), a fortress honor or Fratta (XIII century, now a museum of ancient weapons), Montale tower (XI-XII centuries. ) and the Basilica del Santo forms the upper contours of the capital and the citadel dates back to the beginning of XII century. But every now and then here are evidence of this place earlier defensive structures.

Second Time (XIII-XIV centuries) around downtown with the Governmental Palace, Pyanello Square (Piata della Libertà) and many medieval houses. Most of the walls of this belt was destroyed, retained only a portion of the wall leading from the tower to the parking Fratta Kava-Ancient, but often come across pieces of ancient walls, built in the younger of the building.

Third, the lowest and the youngest are fortifications (completed in 1549 g), preserved the most complete - here you can see the gate Della-Rupa (Degli-Omerelli, 1525 g), the gate of San Francesco (gate Del Loko, 1361-1451 gg), the tower Torrione-theater Titano and the wall connecting the fortress Fratta and Montale.

One of the main attractions of San Marino - Government Palace or Palazzo Publico, built in 1884 on the site of the old palace house-Kommunis Magna (XVI century). The majestic building with a polygonal balconies, battlements and turrets pointed more like a fortress, which, in fact, it is.

Before the Governmental Palace is situated Freedom Square (Piata or Pyanello della Libertà), which rises in the center of the Statue of Liberty, donated Germany Countess Geyrot-Wagener in 1876.

Behind the statue in the stone pavement area is built into a marble slab with a "wind rose", and under the square are the tank - "FOSS" to collect rain water (1471-1478 gg.) Serves to provide the city with drinking water (there are no rivers in the country no a few mountain streams run down from the slopes of Monte Titano). From the parapet of the outer space a picturesque view of the city and cemetery Montalbo, considered to be one more attraction in San Marino.

Naturally, in this old village, and even in a Catholic country, many religious buildings. One of the most beautiful churches of the city, "the heart of the republic", is the Basilica del Santo (the Basilica of Saint Marino, 1838 g), built on the site of the ancient church in Pieve within the upper belt of serfdom.

To her right is a tiny church of San Pietro (the beginning of XIX century) with the tomb of the saint. The Church of St. Quirin, located in the Capuchin monastery, was built in the second half of the XVI century on the site of an ancient chapel dedicated to the same saint.

Founded in 1361, the Church Chizay di San Francesco, which lies on the territory of the Franciscan monastery of San Marino - the oldest building in the republic (construction completed in the XV century). On the territory of the church is the Museum of Church Art and Art Gallery with works dating from XIII to XIX century.

Many in the city and museums - the Museum of Ancient Weapons, Center for the Study of ancient weapons in the nearby town of Borgo Maggiore, Wax Museum with historical reconstruction of more than 40 scenes depicting the history of the republic of San Marino and European Museum of Contemporary Weapons, The Museum of curious things -- the only museum of its kind in the world, the Museum of Torture with a huge (more than 100 tools) collection of torture instruments and Historical Center at the Piazza del Titano.

Also interesting viewing attractions such as the Gallery of Modern Art in the historic center of San Marino, the National Museum in the building of Palazzo Pargo with extensive archaeological and historical collection, the Nature Center in Borgo Maggiore.

Old Car Museum Musot di Auto d'Epoka was opened in 1965, is dedicated to the history of automobiles and motorcycles in the period from 1890 through to 1970. Interest for tourists and is famous collection of cars, Maranello-Russia to discuss how we can be easily guessed by name, the history of cars, the Enzo Ferrari (here billed more than 25 machines of this famous brand, starting with 1951). Also interesting Reptilarium - Center for experimental studies of the mysterious world of reptiles and fishes.

Outskirts of the capital are also rich in historical monuments. The main attractions here, but the numerous castles and other samples of medieval town planning, are the unique temples. In the thousand-year history of this country temple complexes have played an important role in helping to promote the ideals of freedom, brotherhood and hospitality, which has always distinguished this ancient land, as well as being a major educational, cultural and scientific centers.