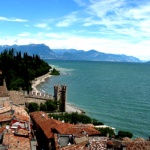 Sirmione - a town in the Italian region of Lombardy, located in the province of Brescia, on the shores of Lake Garda. Sirmione - an ideal place for those who want to combine relaxation with treatment or rehabilitation. Sirmione has been known since ancient Roman times - love to come here by the representatives of the ancient Roman aristocracy, brought here picturesque landscapes and a very mild climate.

Sirmione is located just an hour's drive from Milan. This ancient town is situated on the unusually narrow peninsula, 4 km long.

In the center of the city are known from ancient curative springs, and built the famous Thermal Medical Center. Here you can receive treatment from a variety of ailments or simply to improve their health and gain strength.

In the northern part of the peninsula in the vast olive grove is a famous archaeological area with its giant remnants of ancient Roman settlements, the so-called "Grotte Kattulla" - the ruins of the ancient Roman term and the surrounding shopping streets. Today, modern Sirmione - is one of the most visited tourist destinations.