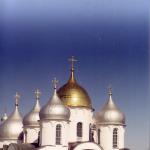 Novgorod Kremlin - holy Russian land. Stuffy Prince Yaroslav, Grand Prince Yaroslav the Wise, he is the oldest surviving in Russia, the Kremlin (first mentioned in chronicles in 1044 year). It is located in the heart of the city, on the left bank of the Volkhov. The Kremlin has remained the oldest stone church of Russia - St. Sophia Cathedral (1045-1050 gg.), Which has the world's cultural significance. In the Kremlin, anciently the residence of the Archbishop - vladychnogo yard, which have reached us, many buildings of different times, including the oldest civil building Novgorod - Cross (Facets) Chamber of Commerce (1433), the Church of St. Sergius of Radonezh (1463), Likhud Corps the end of the XVII century., building Judgment and Spiritual orders, etc.

Yaroslav's Court and the territory of Ancient Torga are on the right bank of the Volkhov River, opposite the Novgorod Kremlin. Yaroslav's Court and the trading was in ancient times, the most vibrant neighborhoods. They massed the main street of Commerce and fit Volkhov bridge connecting the Sofia side. Life here is in full swing from early morning until late evening. Yaroslav's Court is one of the most significant historic sites of Veliky Novgorod. Rich and diverse history's Court. Central excursion alley Yaroslav Court. In the Middle Ages held the central street Yaroslav's Court and the Ancient Auction - breakdown-Plotenskaya. In its southern part, it lay between the churches, the Myrrh-and Prokopy, walked past the St. Nicholas Cathedral and the Church Paraskieva. In the northern part of the street took place between the churches in the Market Place George and John on the flask.

In the XII century. princely power in Novgorod shattered. The freedom-loving people of Novgorod refused to tolerate harassment by the princes and their entourage. In Novgorod uprising began against the prince's power. Princes, in turn, tried to enlist the support of the most influential forces in the Novgorod. Church of St. John in the flasks was founded in 1127 by Prince Vsevolod. In 1134-1136 gg. Prince Vsevolod, wanting to increase the number of its supporters, the charter gave special Ivanovo Church merchant community. It was the last attempt by the Prince to strengthen his power. Nevertheless, the rebels deposed prince of Novgorod.

In May 2000, celebrated 135 years since the adoption of a decree establishing a public museum in Novgorod, now one of the largest museums in the country, known as the State Regional history, architecture and art museum - reserve.

Novgorod State Museum-Reserve - one of the largest museums in our country. It was founded in 1865 NG theological. May 18, 1994 on the building of government offices opened a memorial plaque with bas-relief of the founder of the museum.
Excellent exposure and rich stock collections, unique monuments of architecture and monumental painting is a law of glory and pride of the Museum.

Architectural-ethnographic museum "Vitoslavlitsy, a division of the Novgorod State United Museum-Reserve - the only human institution, dealing with the complex peasant culture. One of the most interesting museums of Novgorod the Great - an open air museum "Vitoslavlitsy, located near the ancient monastery Yuriev - on three sides it is washed by the waters of lakes Myachinskih, the fourth boundary runs in Orel dike. Area of the museum is about 50 hectares.