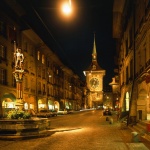 Museum of Fine Arts in Bern (Bern Kunstmuseum) was founded in 1821, this type found in 1879, then in 1936 and 1984 was reconstructed. Now collection of over 3,000 exhibits and nearly 40,000 historical documents. Collection of Museum of Fine Arts Bern is Craft seven centuries, with a separate exhibition in Italy XIII century and the Berne art XVI (Manuel, Anker, Hodler), the French art of Delacroix and Courbet to Dali and Masson, German expressionist Klee and many others.

Natural History Museum Bern (Museum Of Natural History) is owned by the urban community. It was founded in the early XIX century, has acquired an international reputation for panoramic images of birds and beasts of Switzerland and the world in their natural environment. Also contains an impressive collection of minerals, including rare stones from the tops of the Alps and a great room, decorated with precious and semiprecious stones. It should be noted and modern educational collections of zoological and geological exhibits and special exhibitions to inform the public about the latest aspects of natural history.

Linked to the Natural History Museum, Swiss Museum of Hunting and Wildlife in the Castle of Landshut. Exhibitions include where valuable collections of game and hunting stories.

Arts Hall of Bern (Kunsthalle Bern). Since opening on Oct. 5, 1918, Hall of Art is appreciated by the public for the widest Berne, Swiss and international artists. Hall has received worldwide fame, arranging exhibitions Klee, Giacometti, Moore, Jones, Levitte, Naumann, Burena and many others, including the Shema (Szemann) and his "When attitudes become form." 2 / 3 of all the exhibits the museum receives from the city and canton of Bern and their sponsors.

Parliament House (Bundeshaus) should not forget that unlike other Swiss cities, postcards, Bern is the capital of the Swiss Republic (or the Confederation Helvetica). It was from this building and operated it seems to be devoid of any power, except the desire tourist country. The impressive building is located right in the heart of Old Town.

Paul Klee Center (Paul Klee Centre). The new center was planned as the world's largest collection of works by Paul Klee, the opening is expected in summer 2005.

Swiss Museum of Guns (Swiss Rifle Museum) museum boasts an impressive collection of trophies, watches and mugs, which guarantees the participation of the pulse of every visitor, whether you had ever fired or not. One of the most important exhibits is a silver bowl of King William III and the bowl of the German Emperor Wilhelm II, was decorated with silver and gold. The museum contains a large collection of coins and medals, as well as a colorful collection of different things with national and international significance.

House of Einstein (Einstein House). The apartment where Einstein lived from 1903 to 1905 is now a museum that includes photos give an idea about those years that the great scientist held in Bern, as you will see copies of documents and various papers that reflect its scientific activity. It is here that Einstein first published his first theory of special relativity of matter with energy. Subsequently, the formula has become famous throughout the world: E = mc?.

Swiss Museum of the Alps (Swiss Alpine Museum) is one of the most modern in the world, unique offers journey into the culture and character of the Swiss Alpine region in general. Video films, audio-visual slide show, atmospheric scenarios and impressive revelation capture visitors immediately at the entrance and do not let go until the end of a thrilling journey through the alpine past and present.