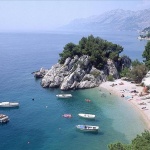 Brela is a modern Croatian resort with a rich history and beautiful nature. This city is known for its extensive beaches, framed by the majestic Mediterranean fir. Summer heat in Brela tempered by sea breezes, so here are excellent climatic conditions for relaxation. Along the beach constructed embankment on which a pleasant stroll in the evenings and sit in one of the many bars. Brela is a pearl of Makarska Riviera and attracts many tourists with its pine park, stretching along the beach.

Brela is located approximately 15 km. the town of Makarska.

Small Dalmatian town of Brela (Central Dalmatia), with a population of only 1500 people, is famous for its unique pebble beaches "Punta Rata", whose length is several kilometers. The features of the beach is a pebble and a large number of pines, closed almost to the edge of the sea. Beach is considered one of the best in the entire Adriatic.

The resort consists of two parts. Old, Mining Brela, with the ancient road leading into the mountains. New - Brela bottom, on the coast with stone houses, small bars and cafes.

To the east of the resort overlook the mountain range Biokovo. In the west one can see the island of Brac.

Pure sea water with a visibility of up to 50 meters, the most beautiful mountain spurs of the Dinaric Alps, a wonderful climate allowed Brela win first place in popularity among all the resorts in Croatia in 2005. Moreover, in 2004 the American magazine "FORBES" included the beach "Punta Rata" in the top ten most beautiful on the planet, where he took 6 place in the world and 1 in Europe. 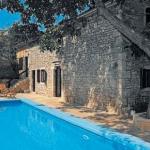 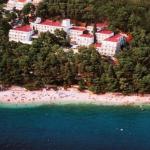 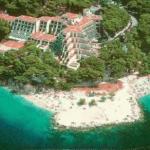