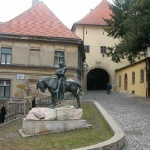 Zagreb - the capital of Croatia - with each passing year becomes more and more popular among tourists in Western Europe. With exquisite architecture, careful attitude to the state's own history, the development of tourism infrastructure Zagreb has recently been tough competition for the two "monsters" of tourism in Central Europe - Prague and Budapest. The popularity of Zagreb among Western tourists in many ways was the reason that in the capital of Croatia, it is sometimes difficult to find cheap housing. Hotels in Zagreb (even high-end) are rarely empty, and private apartments will fall afford not all. And yet, despite these difficulties, the trip to Zagreb promises to be the rest, who want to get, making a journey. Zagreb - a genuine tourist oasis: a bright, cozy and hospitable.

The city is situated on the River Sava, a tributary of the Danube, at 45,815 ° north latitude and 15,98306 ° east longitude, at an altitude of 120 meters above sea level (lowest point) near the mountain range Medvednica.