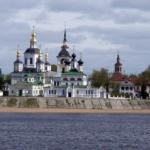 An interesting feature of the Great Ustyug is a complete absence of any kind were ancient wooden structures. Until the mid-17 th century, the city did not know of another building material, except wood, but the second half of the 17 th century is the heyday of its stone religious architecture. Go to the brick building was associated with an exceptional wealth of the city. merchants and the clergy. The wooden churches were replaced by stone, and after a major fire in 1772 is widely deployed in the construction of stone houses. The city is the stone walls were never after the Time of Troubles had not been updated and is not used.

• A Council's Court - the main temple ensemble Great Ustyug. Includes: Cathedral of the Assumption 1652-1663, with a bell tower, cathedral Procopius the Righteous in 1668, the Cathedral of St. John Ustyug ages 17-19, Bishops House 18 th century, as well as several churches and a number of outbuildings. It is recommended to mandatory inspection.

• Church of the Ascension in the Market Place - in 1648, the earliest surviving monuments Ustyug stone architecture. One of the most impressive temples Great Ustyug. You need to see both outside and inside.

• Michael-Archangel monastery - the second most important architectural ensemble of the city, the main stone buildings which are arranged in the second half of the 17 th century.

• Streets of old city - in the first place we can recommend a walk on the Soviet Avenue (main street of the old town) and on the embankment Sukhona running parallel. The length of both streets one and a half kilometers.

• House Shilov - one of the most interesting Ustyug merchant houses, built in the 60 years the 18 th century in Baroque style. It is recommended to mandatory inspection.

• Dymkovo Sloboda - a church group, located on the other side of the Cathedral Sukhona's Court. Two churches early 18 th century. A stunning view of the Great Ustyug.

• Trinity Gledensky Monastery - located 4 km from the city on the far right side Sukhona at the point where it merges with the South, is the beginning of the Little Northern Dvina. Somewhere near here was an ancient city stretches Gloeden. The exact location of its location is unknown. The monastery is open for inspection only in summer time. Definitely worth a look at the carved royal gate at the Trinity Cathedral and himself iconostasis.