In the area of the resort are often observed descending winds, the so-called fen. Hairdryer is often accompanied by squally gusts of wind. Hairdryer observed more frequently in March and April, referred to as "eater of snow." Chances of a hairdryer and in September-October. Hair dryer in the mountains of southern Switzerland, described as follows: "In the southern part of the sky appears light, very colorful vualeobraznaya clouds, settling on mountain peaks. 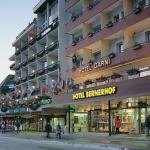