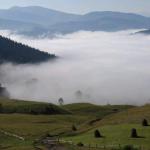 Ivano-Frankivsk
City named Stanislav until 1962 - a royal free city, which stretches between the rivers and Solotvino Nadvirna Bystrica, in the foothills of the Carpathians, near the ancient Galic - the capital of Galicia-Volyn principality.

In 1662, the city received a Magdeburg right. The city was founded on the site of the village Zabolote as a fortress to protect against the raids of Crimean Tatars and the strong point of Polish magnates Potocki in Galicia. There passed central trade route from Lviv to the mouth of the Danube. In 1772 the city came under the rule of Austria. Stanislav started from Rynkovoy Square and City Hall, which survived and now, though modified. Further construction reflected the ideas of the Renaissance, as expressed in the planning of the city's outskirts, the streets, temples.

Here you will discover a unique gem treasures of nature. An unforgettable experience will create a blossoming alpine ridges and pure mountain springs. The hospitable people of this wonderful land with great pleasure to welcome everyone who wants to know her beauty and richness of culture. The central area of the city - the area market. Here is the City Hall and the here has all the cultural and social life of the city. Along the perimeter of the square are many shops, cafes. Food is very tasty and very inexpensive. Nearby is another area Sheptitskiy. On the square rasplolozheno beautiful building art museum, a statue of the Virgin Mary with a mirror stream.

Ancient Galich (National Reserve)
The picturesque old town, situated in the valley of the rivers. The convenient geographical location in combination with artificial fortifications easier for his defense. So far, the remains of five series of powerful ramparts, which reach a height of 25 meters. It now houses the Museum "Ancient Galich".

Kolomiya
The town is famous museum, which operates exhibition of applied decorative folk art Hutsulshchyna. The museum collection includes more than 20,000 exhibits, situated in 20 rooms. Recently the museum was opened in COLOMIERS Eggs. This is a unique creation of art, it is also called, the eighth wonder of the world. The uniqueness of the project that the museum is made in the form of eggs, Height of 14 m, diameter 10 m, which is made entirely of colored glass with a total area of over 600 m2.

Yaremche
The most popular tourist center in Ivano-Frankivsk region. Located 60 kilometers from Ivano-Frankivsk in the foothills of the Carpathians. Here, at any time of year, an unusually beautiful nature, clean air. The city is situated at an altitude of 500 meters above sea level in a canyon with forests and small mountain streams. Flowing through the city one of the largest rivers of the Carpathians - the Prut river, which originates near the top of Hoverla.

Uzhgorod
The first mention about this ancient city has at the end of IX - beginning of X century and is associated with the name of its founder, the Slavic prince Labortsa. Uzhhorod Castle, which was his residence - one of the most important historical and architectural military memos Ukraine. The city fascinates tourists from various countries for its monuments of history and architecture. The city has a Baroque church 18 th century, the bishop's palace. As well as museums - art, local history, folk architecture.
Huge number of rare trees and flowers make this city more beautiful.

Rahov
The city is located in the heart of the picturesque Carpathian peaks. Has road, rail transport with other cities of Ukraine. Rakhiv (from the word "believe" or "land owner Raha") - one of the most thunderous Ukrainian cities - there was about 43 thunderstorm days a year. Also - this is the alpine town in Ukraine - it is situated at an altitude of 820 meters above sea level. In the city the largest vertical drop between the streets: 900 feet - the highest and 400 meters - the lowest point of the city.

Svalyava
The first record of this place dates back to XII century. Svalyava - center, which brings together several well-known Transcarpathian health resorts. In the vicinity of the city are numerous sources of mineral waters such as Borjomi. Established resort - "Sunny Transcarpathia", "Kvitka Poloniny", "field" and others. Monument of architecture - Michael Church 16 centuries. The city has a museum.

Lviv
The city is the regional center, founded in the mid-thirteenth century Galician-Volyn King Danylo. The name of the town was in honor of his son Prince - Lev. Lviv is essentially a grand museum - the state history and art combine preserves numerous monuments of culture and folk architecture of different epochs. The most famous among them such as the Church of St.. Nicholas, XIII Art., Armenian Cathedral XIV-XV st., Ensemble Bernardine monastery and church, the Church of St.. George's Market Square - XIV-XIX century. Do not forget to visit the old pharmacy museum. Following a study tour of Lvov, tourists can visit Drogobych (churches and cathedrals XIII-XVII st.) Sambirs (ensemble of buildings of the monastery Bernadsky XVII cent. And the Jesuit colleges), Zhovkva (churches, synagogues and churches), Urich (Tustansky State Nature and Historical Reserve, Old settlement X-XIII century.,) Naguevichi (Historical and Cultural Reserve, home to the famous Ukrainian poet Ivan Franko). In Lviv is also famous Opera House. In 1975, the central part of the city was declared a historical and architectural reserve.