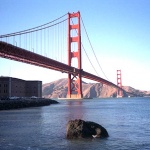 Quarters
The historical center of San Francisco is the northeast "square", in the south bordering on Market Street. Now is the center of the Financial District, located near Union Square and the area hotels and shops. In these areas are way "cable carriage, which from the top of Nob Hill, where they live tycoons and businessmen, down to the wharf Fishermen. Also in the historic "square" get Russian hills to the famous winding street - Lombard Street, with the city's version of Little Italy - North Beach and Telegraph Hill.

In District Mishion District resides mainly working class district inhabited by a majority of immigrants from Mexico and South America.

During the 2-nd World War, Japanese quarter was on the brink of destruction as the Government decided to evict all Japanese Americans, but almost at the same time the area was filled with thousands of African-Americans. Neighborhood Alamo Square famous for its number of houses, which are called "painted Lady", here are mansions of the business elite. In the north is an ordinary residential area Merina.

Richmond, a vast region in the north of Golden Gate Park that extends to the Pacific Ocean, today it is often called "New Chinatown". By passing the Chinese in Richnomde resident immigrants from Russia and other parts of Asia. In the south of Golden Gate Park is the Sunset District, here dominated by the Asian diaspora. Richmond and Sunset districts of the biggest middle class, together they are known as the Avenue. Beyvyu-Hunters, located in south-eastern part of the city, the poorest and most dangerous, due to the high crime rate, a quarter of the city. Another southern quarter of the city are ethnically different from Beyvyu-Hunters, it is populated by students and the working class.

Japanese tea garden off South Market old industrial district of San Francisco, experienced a complete reconstruction in the period of DotCom companies, quarter witnessed the construction of many tall buildings. Following the success of South Market off many areas - Mission Bay, began a complete overhaul of its infrastructure.

Beaches and Parks
Across the Pacific coast beach stretched Ocean Beach, but it is closed for swimming because of the cold water and strong currents. Entire territory east of the Golden Gate Bridge Baker Beach is a beach, a beach known for its colonies of the endangered plants Hesperolinon congestum.

The largest and most famous park in the city - Golden Gate Park, it occupies an area that extends from downtown to the Pacific Ocean. Once the entire territory of the park covered only with grass and sand dunes, but now the fleet consists of thousands of man-planted plants and trees. The park is rich with a great view of the various gardens, the most famous of them: Conservatory of Flowers, Japanese tea garden and a botanical garden Stribing Arboterium. Bueno Vista Park - the oldest park in San Francisco, it was founded back in 1867. In the center of the park is fresh water lake Mersed.

Museums
San Francisco has a large number of museums, the most famous of these is the Museum of Modern Art »(SFMOMA), are collected here exhibits contemporary and 20 th century. The museum moved to its new office building on South Market in 1995, this collection draws about 600,000 visitors a year.

Palace of the Legion of Honor off "basically shows the European work. Golden Gate Park is famous for its Museum of Fine Arts - MH de Young. It was founded in 1894, but was heavily damaged after the Loma Prieta earthquake in 2004, it was closed for renovation, and was opened on Oct. 15, 2005. Just as in the Asiatic Museum of Art, the MH de Young exhibited no European work. Asian Art Museum has at its disposal one of the largest collections in the world of Asian artifacts and artworks. From 1958 to 2004, all the exhibits were in the wing of the Museum MH de Young, but when it was closed for reconstruction, the Asian Art Museum moved to the library building in San Francisco.

Near the lake Mersed is the San Francisco Zoo, which cares for about 250 animals, 39 of which are on the brink of destruction.

Festivals
In San Francisco is very much different and unique street festivals, parties and parades. The most famous of them - gay pride parade, the largest in the world, it takes place every June. But this is not the only famous than the city: Folsom Street Fair is held in September, a parade in honor of Chinese New Year in February, Carnival (the Christian holiday season) passes through the spring, Fleet Week in October and rave festival Lovparad "takes place in late summer . San Francisco is also carrying out various popular competitions, such as race from the Bay to Breakers marathon or San Francisco.

Many quarters have their own annual festivals, especially the live performances of musicians. Biggest of them: Castro Street Fair, Art Festival Union Street, North Beach Festival and Fair Heyst Ashbury. San Francisco Opera each year in Golden Gate Park in the open, free happy festival. Symphony Orchestra, like Opera, arranges several performances in July, is also an integral part of the festival looks forward to Grove. July 4, U.S. Independence Day, over the harbor Fishermen held the annual fireworks, more fireworks show is held in May, at the festival KFOG: Kaboom. 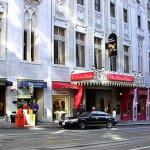