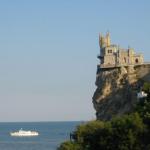 According to the Agreement between the Governments of Russia and Ukraine on visa-free travel of citizens of Russia and Ukraine "dated 16.01.1997 (as amended on 30.10.2004), citizens of Ukraine and Russia may enter, exit and movement within the territory of another country without visas. For the citizens of Russia documents the right to cross the Ukrainian-Russia border is Russia's new type of passport or passport. Registration at place of residence in the presence of the migration card with a mark of border control is not required if the stay does not exceed 90 days. For citizens of other countries for entry into Ukraine needed a passport. For children under 14 years of age must have a birth certificate with a liner of Russia's citizenship. Children under 18 years of age traveling to the Crimea without parents need to make an attorney. Power of attorney is issued to accompany parents or independent travel. When leaving the child with one parent, it is recommended to have a power of attorney from the second parent. When crossing the border, foreign nationals own a migration card before going through passport control. Map issued free of charge in the crossing of borders. At passport control, in this map placed the stamp. Then the map is divided into two parts, one of which ( "Departure") is a foreign citizen for the duration of stay in the territory of Ukraine. Site returned to border guards when leaving the country at crossing points of the State Border of Ukraine. If a foreign citizen crosses the border with the internal passport, a stamp affixed only to the migration map. If a foreign citizen crosses the border with a foreign passport, a stamp affixed and a migration card and passport.